We usually, just hear people claiming that meat is terrible for us because it rots in our stomachs.

Unfortunately (or fortunately), this statement is not just untrue, it’s actually the opposite of what really happens.

What it means to “rot”

Let’s start by first identifying what it means to “rot.”

Most people think rotting is simply the act of food “going bad,” such as when it starts smelling bad and might make you sick if you eat it. But “rotting” actually means the process of being broken down by fungi or bacteria.

And this is more than just a technicality. When food in your refrigerator rots and starts smelling bad, it does so because of the byproducts that the bacteria produce when they decompose the food. 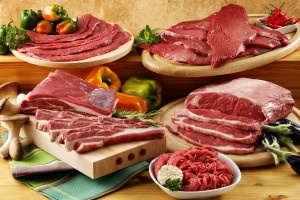 A quick lesson on digestion

The quicker explanation is this:

Foods get crushed in our mouths, where it also starts getting broken down by amylase. It then sits in our stomach for a few hours, where stomach acid (highly acidic) starts breaking down the proteins and some of the fats. Then, everything goes into our small intestines, where bile does most of the work to break down food into its smallest components so that our small intestines can absorb the nutrients.

The caveat to all of this is that our bodies can’t digest everything we eat. For instance, cellulose (which is contained in plant cell walls) isn’t broken down at all by the human digestive system. Cows, however, are pretty good at breaking it down.

What really rots in our guts?

As it turns out, our bodies (through the work of enzymes like bile and stomach acid) are very good at breaking down proteins and fats. In other words, our bodies digest meat with great efficiency.

On the other hand, many of the fibers and starches in plants do not get digested until they make it to the large intestines, where the bacteria start decomposing it.

As an aside, that’s where bloating and gas come from. When bacteria decompose (or “rot”) things, they often produce carbon dioxide as a byproduct, which causes you to get bloated or have gas. Is it any wonder that beans – full of fermentable fibers and resistant starches – are the musical fruit?

In other words, it’s plants that rot in our guts (although not in our stomachs).

Rotting is not all bad, though

Even though I find it quite ignorant and silly to claim that meat rots in our stomachs, since it’s really plants that rot in our guts, the act of rotting isn’t a bad thing.

In fact, we need to feed the bacteria in our guts, since that bacteria is crucial to our health in so many ways. The bacteria is actually responsible for our ability to absorb several vitamins and minerals.

All of that said, there’s no reason that you need to feed it grains or legumes. The bacteria in your gut can live quite well off of vegetables, fruits, and tubers.

What is Coronavirus and how to protect yourself from it?
7 de febrero de 2020